When we learned about Creative Comic and Collectible’s Viking Vs. Barbarians action figure Kickstarter, we were impressed and intrigued! So in order to learn more, Toy Wizards got together with the toy line’s creator, Drackstin Zaccone to learn more about the progress of his crowdfunding effort and how the Vikings Vs. Barbarians toy line idea came to be! 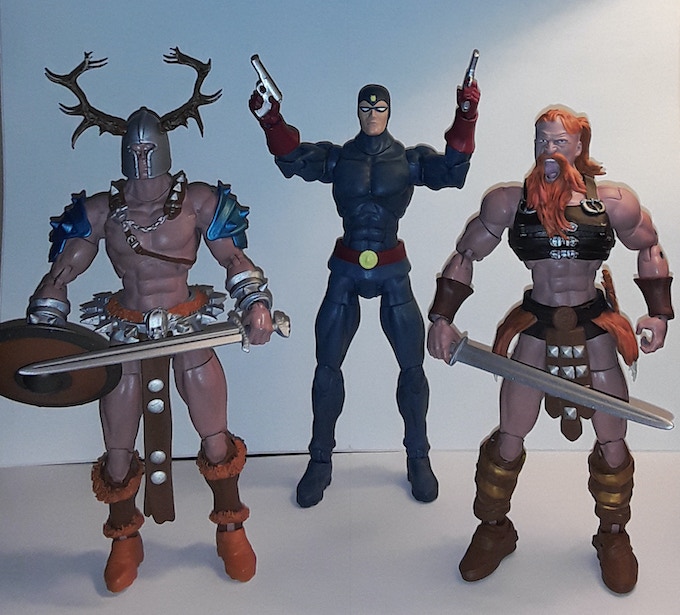 Hi Drackstin! Thank you for giving Toy Wizards this interview. Your current project Vikings and Barbarians is live on Kickstarter and from what it seems, the reception is looking good. Do you have any other toy lines that have been successfully crowdfunded? Would you please start from the start and tell Toy Wizards readers about this toy line and where the idea came from?

Drackstin: Thank you Loryn. My current project Vikings vs Barbarians is going well. I don’t have any other toy lines that are crowdfunded but I do have a comic book line of toys in production as we speak. The idea for the Viking vs Barbarian action figure project came from my love of medieval/fantasy genre and lack of figures for it. Everyone has Knights, But Vikings, barbarians, and a few others are very limited if none at all. So, I talked with a sculptor friend of mine to see what we could come up with and I’m very happy with the final idea.

The pictures of the action figures look very professional. Who have you collaborated with to make these designs look so authentic?

Drackstin: I take all the pictures for my figures myself. I am far from professional, but I have some knowledge through collage that definitely helped me along the way. The designs for the figures themselves came from brainstorming with my sculptor a bunch of details and ideas from those types of individuals and using the coolest looking options.

Would you please tell us about your personal interests and fandoms? How did you know that the toy market was missing this Viking niche of toys?

Drackstin: I tend to investigate toys a lot, always seeing what new and out there. On top of that I love video games and fantasy movies. Because of this I am always looking to see what available for certain things. As I said before, everyone has knights, even I would like to make my own, but Vikings or at least a wilder type of figure was definitely not out on the market.

What is your experience and personal background in the toy industry, both as a collector and a professional?

Drackstin: Well, I have been collecting toys, mostly action figures since I was very young. I have a large collection ranging from statues to figures and many things in between. I also have a degree in mechanical engineering and 3D design. So as I got older I started to look into how action figures worked more and functionality. I have been designing small toys since I was in high school, but I was final in a position to try something large scale and public now.

Drackstin: My own collection ranges from hundreds of old Star Wars figures and vehicles still in their boxes, to tons of Transformers, Marvel figures, video game statues, and a lot more. I definitely find six-inch figures one of the best to collect. It’s a great scale that lets you have a lot of details and articulations and doesn’t take up too much space.

How many people (friends, staff, crew, etc.) do you have working behind the scenes supporting and helping create this toy line?

Drackstin: At the moment I have a very small amount of people working with me, I tend to do as much as I can alone to make sure I can over see everything that’s going on. I work on some sculpting and advertising myself also. The help I do have is mostly outsourced; I have a factory I’m working with, a 3D sculptor, and a foreign relations go between that helps with promotions. I’m also working with a comic book company (Angry Viking press) for artwork and comic design, that should also help with the Kickstarter.

What is your number one toy line that you wish would be revived? Do you think revivals are necessary or do you think fresh toy lines are needed in the toy world/collectors circle?

Drackstin: Honestly, I can’t really pick just one, there are so many great toy lines out there from my childhood and from when I grew up. But I don’t think they need to be revived unless they are pulled back into popularity again, we see this a lot though. So many old TV shows are being brought back, bringing forgotten characters back to life. But this also opens the ability for technology to show its evolution. Toys have grown so much over the years, I believe making “retro” figures is a waste of what we can really do. I think improving on what we have, making new and fresh toy lines and even updating older lines that are brought back into the light with what we are capable of is the key to making more people who are normally not into toys come into the hobby.

What is one thing about you (personally or something you collect) that might surprise people who know you?

Drackstin: I collect many things, from toys to comic books, even animals. In my spare time I take care of many animals. I built a reptile room in my house and I have over 50 snakes. Its amazing how beautiful and individual these animals are, although many people are scared of them, it’s mostly false information that brings that fear. I am also starting to breed these animals, I’m excited about this because I have a species of snake that it threatened in the wild and I want to contribute to bringing it back.

What else does Creative Comics and Collectibles have in the pipeline that you would like to share with readers?

Drackstin: Currently I am smoothing out what characters will be featured next in my comic action figure line. I am working on many addition ideas for the fantasy action figure line that goes with my current Kickstarter. I have a tabletop game that I’m running through play testing, and I have a bunch of other ideas that are just waiting to see how far my Kickstarter will go. I am very excited about unlocking the female Viking and Barbarian figures and continuing to do more with the fantasy line.

What has been the response to these figures and how do you feel about the Kickstarter support you’ve received?

Drackstin: My Kickstarter is moving along at a great rate, and I can’t wait to see it finish. We are very close to the media stretch goal, and that’s a very exciting thing, since when its unlocked everyone who has pledges for the Wave One all in will get both of the energy weapon packs for free. The Wave One all in will also get any of the current stretch goals for free as soon as they unlock. Making it such a great value. Its limits to 75 pledges, and its already under 50, but that’s to be expected, since it comes with up to $120 of free figures, and accessories.