Did you know there was a National Puzzle Month? Neither did I, but if you’re going to rock some puzzles, it might as well be from Ravensburger! 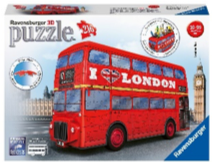 Bring this replica of the iconic double-decker London bus to life. Consisting of 261 interlocking pieces, the completed 3D puzzle has moving parts, like rotating wheels and openings in the top of the bus that turn the puzzle into a fun desktop accessory. (Ages 10+ / $29.99 MSRP / Available on Amazon) 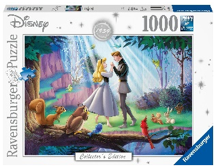 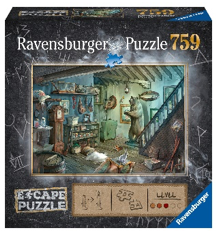 Escape Puzzles
Ravensburger’s popular Escape Puzzle line introduces two new challenges to beat in 2020. Gather a group and work together to puzzle your way out and solve the riddle. New titles include “The Curse of the Wolves” and “Forbidden Basement.” (Ages 12+ / $19.99 MSRP / Available on Amazon)

Eight years after the company was founded by Otto Maier, Ravensburger created their first-ever puzzle called the “Geographical Puzzle“. Made of wood, the inspiration for the puzzle stemmed from the desire to create an educational product that taught young children about geography.

The concept can still be seen in many wooden children’s puzzles today where shapes are cut out and the children must put them back into their corresponding places. Not only did this puzzle teach geography, but also assisted in the development of hand-eye coordination, shape recognition and fine motor skills.

The jigsaw puzzle story (cardboard that is) began when colleagues of Ravensburger traveled to the USA on a business trip and stumbled across 500 and 1,000 piece jigsaw puzzles in department stores while conducting store checks.

Intrigued by the product, they quickly learned that some puzzle companies were producing around 2 million puzzles annually. This inspired them to bring this knowledge back to Germany, which ultimately led to the creation of the puzzle category.

A lot of research went into figuring out the process of how to make a jigsaw puzzle. Questions needed to be answered, like what type of cardboard was best for printing? What is the best way to punch a picture into puzzle pieces? Or how can filling the bags be automated?

After 3 years of research and experimenting, the first 500-piece adult puzzle fell out of the punch.

As the puzzle business continued to grow, Ravensburger began to explore new puzzle innovations. This journey led to the launch of Ravensburger’s the first puzzle accessory, the Puzzle Conserver.

At this point, the puzzle market was booming, and competitors were beginning to offer higher piece count puzzles. Ravensburger knew that being the leader in the market meant having the largest piece count and set out to create the world’s largest jigsaw puzzle.

Ravensburger launched the 5,000 piece puzzle, which was the world’s largest mass-produced puzzle at the time.

In order to expand their puzzle offering, The Ravensburger Group welcomed F.X. Schmid to the family. Founded in 1860, this Munich based puzzle brand offered children’s and adult puzzles in a variety of themes and sizes.

The piece count battle continued on between puzzle brands, until Ravensburger took it to a new level, introducing the 32,256 piece puzzle into the market. This massive puzzle called “Double Retrospect” was the world’s largest puzzle at the time. It featured 32 sections of artist’s Keith Haring’s vibrant, delightfully quirky images.

The finished puzzle measured over 17 feet long and 6 feet tall and weighed 42 pounds. In fact, due to its weight, it actually came with its own hand trolley for easy transportation.

2017 | The Largest Disney Puzzle in the World

Ravensburger introduced the next ultimate puzzle challenge with the 40,320 piece puzzle – “Memorable Disney Moments”. It is currently the largest commercially made Disney puzzle in the world. The image features 10 iconic scenes from the most popular Disney films and will take you on a little journey through time from “Snow White and the Seven Dwarves” in 1937 to “The Lion King” in 1994

We took puzzling to the next level and introduced Escape Puzzles. What makes these puzzles unique is the use of an innovative cutting process that allows pieces throughout the puzzle to fit together to create ‘mini’ puzzles. Puzzlers solve riddles hidden within the puzzle, use their solutions to find the right pieces in the puzzle, and then connect these pieces to form items or objects that will help your escape.

Similar to physical Escape Rooms, the Escape Puzzles are perfect for social gatherings where you can work together with friends or family to puzzle your way out. Enjoy trying all of our different Escape situations.