Eaglemoss Publications, best known for their comic book inspired statues and nerd-vehicle replicas (Star Trek ships, TARDIS, Alien/Predator ship, and so on) is showing off five new Batman statues, all of which are available for preorder today. Grab your cape, crusader, because we’re flying over Gotham….getting ready to buy some DC statues…and….

Man, this joke is falling flatter than Val Kilmer during the circus scene where he shouted “Harvey! I’m Batman!”

This cowl is the first in a collection of statuettes highlighting Batman’s iconic appearances from 80 years of comic book, TV, video game and movie history.
This cowl is based on the Dark Knight’s suit from Batman Vol. 3, the first new Batman title from DC Comics’ Rebirth era. Each cowl is produced in polyresin and comes packed with a 16-page magazine. This bust is made of polyresin, has an MSRP of $44.99, and will start shipping this month. You can preorder it here.

Batman: Arkham Asylum after its release in 2009, became a smash hit, gaining both critical and commercial success. To celebrate its 10th anniversary, Eaglemoss Hero Collector will produce a limited-edition series of figurines inspired by the game’s unique character design and distinctive style.

Each highly-detailed polyresin figure will be approximately 5 inches tall, based on the original 3D models used by the production studio, and accompanied by a magazine exploring the story of the game and the wider world which developed around it.

He has an MSRP of $19.99 and is due out for shipping this month. You can preorder him here, or if you want, you can pick up the three pack which includes The Joker and Harley Quinn for $54.99.

This statue is rad as hell, and I love those off centered weird point skinny cat ears. Celebrate the ever-changing appearance of Batman throughout the character’s comic book history with the Batman Decades collection. Each issue will include a figurine inspired by the art of a decade and a 16-page magazine focusing on the Dark Knight’s adventures at the time. This statue is five inches tall, costs 24.99, will ship November 2019, and can be preordered right here. 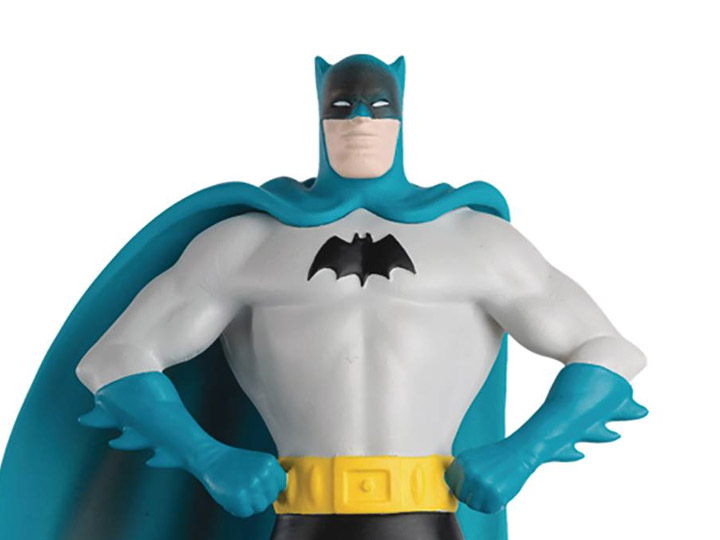 No one messes with Adam We! I love this color scheme so much. Celebrate the ever-changing appearance of Batman throughout the character’s comic book history with the Batman Decades collection. Each issue will include a figurine inspired by the art of a decade, and a 16-page magazine focusing on the Dark Knight’s adventures at the time.

This lovely version of Batman costs $24.99, stands five inches tall, will ship November 2019, and can be preordered right here.

And in a little magic act I call “Saving the best for last”, I’m going to present my favorite of all of the Batman statues to you. This Batman the Animated Series statue has the heftiest pricetag. It costs a whopping $139.99. However, the leap in quality is undeniable. You are definitely getting your money’s worth here. From what I see in the pictures, it looks like the cartoon jumped right out of the screen, whereas the paint on some of those budget figures looks a little…well…schmeared.

Inspired by the iconic Batman: The Animated Series, the latest mega-sized figurines from Eaglemoss Hero Collector make an essential double addition to any Batman collection.

This imposing duo are sculpted to capture the unique style of the show, hand-painted, and stand 12″ tall. Each mega figurine is limited to 1000 and comes complete with a numbered certificate of authenticity.  So, this Batman is a big boy right here. He will ship this month and can be preordered here.