Mezco Toyz shows off their second summer exclusive, which is semi San Diego Comic-Con, and semi ‘Get on the waitlist, jerk’. 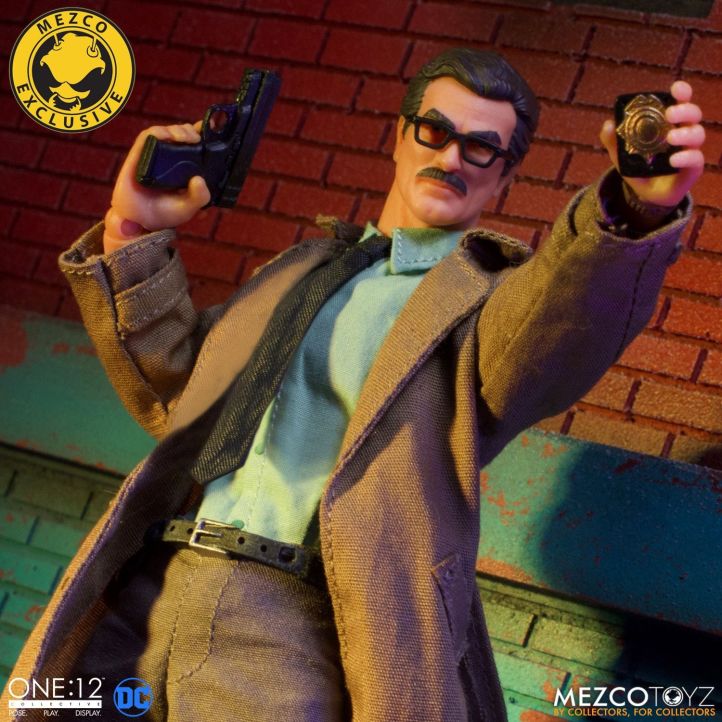 Commissioner Gordon (Bat Signal included!) makes his One:12 Collective debut with an MSRP of $125. Mezco Toyz is calling this piece a Mezco Exclusive, but aren’t explicitly calling it a San Diego Con-Con exclusive. However, they do state on this toy’s listing that you can have a chance to buy it early (and not get wait listed) from their SDCC booth, #3445.

And just putting it out there for Mezco Toyz fans wondering where more reports of their exclusives are; we intentionally didn’t write an article about their ant-faced mascot, Gomez.

The Bat Signal, the searchlight device used to summon Batman, is rotatable and shines bright in any direction it’s pointed. Simply flip the switch on the base to power it on and crank the handle to emit the Bat emblem onto a flat surface.

The One:12 Collective Commissioner James Gordon figure comes with two head sculpts portraying a mid-career James W. Gordon as well as an older portrait. The figure is outfitted in a button-down shirt with necktie, a removable trench coat, slacks, and dress shoes. Committed to ridding Gotham City of crime, he comes well equipped with a removable GCPD issued tactical vest with functioning zipper, and a that belt can hold his GCPD police badge, walkie talkie, and handgun with holster.

Set the scene with the included diorama display which portrays a gritty, urban rooftop where the Bat Signal can be used to light up the Gotham sky.

Somewhat skeptical of Batman’s vigilante method, Commissioner Gordon recognizes the necessity of Batman and the two have developed a mutual respect, a steely forged alliance, and implicit friendship.

Each One:12 Collective Commissioner Gordon and Bat Signal are packaged in a collector friendly box, designed with collectors in mind.