Last week, I was scoping Instagram for some sweet toy news when I saw that Super7 was re-releasing their Nosferatu ReAction figure into the wild.

Seeing the grizzly old 1922 vampire monster man got my brain thinking about other classic monster creatures I’d love to see in action figure form. Including the role that inspired the joker, The Man Who Laughs from the 1928 silent film.

But that got my brain spiraling to my favorite actor of all time, Lon Chaney, best known to many as the Phantom of the Opera from the 1925/1929 (semi-color release) Universal horror film of the same name. Of course, Super7 already released a line of ReAction figures based on the Universal Horror Monsters, which included Lon Chaney’s Phantom of the Opera, both in scary boogie man dungeon dwelling form and The Red Death from the Masquerade Ball.

A quick honorable mention to this Phantom from Diamond Select Toys, which looks somewhere between Lon Chaney’s first Phantom appearance to Christine in the mirror scene. Pretty tasty.

But what about all of the other amazing roles Lon Chaney performed that deserve action figures of their own? As a stellar character actor, there are so many depictions of incredible creatures and people Lon Chaney pulled out of himself that we can’t allow to get lost to the combusting celluloid sands of time. Therefore, today on Toy Wizards, we are counting down the top six roles Lon Chaney played that need to be made into 6″ action figures!

Looking at you, 12″ London After Midnight figure by Sideshow.

Speaking of London After Midnight, this lost film might be one of Chaney’s most famous roles, which is amazing because few people have actually seen the movie in its entirety. It’s a lost film, disappeared to the vaults of fiery hell where many lost movies of the time go. Seriously, they just used to melt, warp, fade, and/or combust. Times were tough in the world of film preservation. But London After Midnight, a vampire film starring Lon Chaney wearing those gnarly spiky teeth is a horror movie figure I’d like to see other companies take a crack at.

5) The Hunchback of Notre Dame

What makes a monster and what makes a man? That’s the question Disney asked of this cathedral dwelling deformed bell ringer in the famous novel by Victor Hugo. Lon Chaney played this role in 1923, and while many classic horror fans may be more familiar with his depiction of the Phantom of the Opera, there’s no denying Chaney’s iconic Quasimoto would make an excellent action figure of sorts.

Did you know he shoved a custom glass object in his eye to achieve that popping bulge eye? The man was dedicated to his craft.

Laugh Clown, Laugh…even though your heart is breaking.

While Lon Chaney played a clown twice in his movie history (the other role being the lead in He Who Gets Slapped, 1924) this is the role that many fans remember, likely because of the official DVD release. Chaney is one half of a traveling circus act alongside a male business partner. At some point, he and his partner find a little girl and decide to raise her together and give her a role in their traveling circus. The three are a happy family. Time passes and the girl grows into a beautiful young woman, somewhere around 14-15 years old. And to his terror, Lon Chaney’s character (Tito) finds he’s fallen in love with his daughter, Simonetta. However, Simonetta reveals that she has broken off an engagement with a man named Luigi because she has fallen for Tito as well. 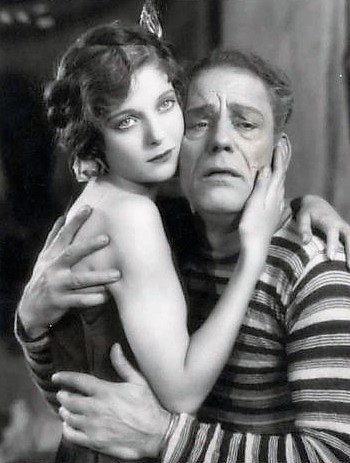 It’s sad, it’s uncomfortable, it’s tragic, it’s beautiful. It’s a whirlwind of emotions, and if someone could just make a figure of Tito in his clown makeup for me to keep on my dresser as a reminder of the beauty of life and its attachments, I would be really into that, thanks.

Herald as Lon Chaney’s only ‘Talkie’, I paid $70 for a VHS copy of this incredible film in 2003. I also have the silent version, which really doesn’t have the same magic. Lon Chaney plays one of three thieves, The Unholy 3, but within that film, he plays his regular character, a ventriloquist, and an old lady as a decoy.

Rumor has it that Lon Chaney was so good at throwing his voice, that people on set thought the voices were pre-recorded and not actually coming from him. This also disproved people’s assumptions that he was a silent-film-only one trick pony (though how can you call that level of makeup and acting mastery a one-trick-anything) and was the beginning into what could have been a spectacular acting career in talking films. Unfortunately, Lon Chaney died from lung cancer shortly after this film was complete. But with that, I would love a three pack of action figures based on his characters from The Unholy 3.

Another iconic role where Lon Chaney tortured himself for the sake of art, The Penalty is a film featuring the man of a thousand faces playing a crime boss with amputated legs. Really, it’s a revenge film. In order to achieve this look, Chaney had his legs strapped to his back with caps over his knees so he could ‘walk’ on them using crutches. I would love a sepia colored figure, or even a statue, of this character for my ever-growing fantasy Lon Chaney shelf.

And lastly, in the best game of smoke and mirrors that Hollywood had to offer, Lon Chaney teams up with a young (and not yet insane) Joan Crawford for another gangster carnival combo film. Chaney plays Alonzo, a master dart thrower in spite of not having arms. However, the secret is revealed when viewers learn that Alonzo does in fact have arms, and he and Joan Crawford are in cahoots. After so many roles playing deformed ‘broken’ people, it was actually a legitimate shock to see that Chaney’s character actually did have his arms! It felt like it was a role made for fans, and everyone who followed Chaney’s roles were in on some kind of wink and nod.

An action figure featuring Lon Chaney’s Alonzo character in his Spanish inspired getup complete with missing arms, I think, would be an amazing nod to his life, career, and hos of roles. Because with more and more movies using CG and “special” effects to achieve limb loss *cough, Star Wars Episode III* it’s not only imperative to remember actors like Lon Chaney and their dedication to acting, but to help us fans memorialize their legacies.