Papa Toys has only been on the scene for a little while. Their notoriety comes mainly from a reputation as a company that obtains design files of other third party company’s upcoming toys and then beats them to production. The first release in the PPT series was PPT-01 Camera Squad. An upscaled KO of a very old third party Reflector from Perfect Effect. Thing is, this release came right as Mech Fans Toys announced their own upscaled KO of this older Perfect Effect set. Once product shots of both party’s offerings hit the internet, it was quite clear we were dealing with the same source file.

Upon release, there were some variations in the toys themselves such as differing head sculpts, the actual size of the production pieces, and slight modifications to the engineering that each company thought would alleviate issues. The company’s fourth release PPT-04 Flame Warrior was a legends scaled Hot Rod. The design was labeled as ‘stolen’ soon after images appeared online with rumors swirling about on Weibo blogs that this toy was an original design meant for a future Mech Fans Toys release of the character made popular in the 1986 animated movie.

It’s no shock when a small third party company happens across a CAD (Computer Aided Design) file of an independent designer’s toy idea. In most cases with third party Transformers, these designs are shopped around to multiple manufacturers before a deal is made and production begins. Sometimes old designs get re-sold to a new company that thinks they can improve upon them and offer something new after a product has had ample time at market. There’s a number of variables to consider in a very dog eat dog world where everyone is balancing on a very thin line that is ultimately Hasbro’s intellectual property.

Undeniably this is Generation One Ultra Magnus. He borrows many design elements from a toy criticized for its bulky shape and inconsistent scale the much, much larger Masterpiece Ultra Magnus. Papa Toys Magnus stands at 16cm at the top of his antenna. A mighty stature amongst other bots in this scale. Is he too big? Well, I always say that scale is relative. Especially when dealing with a cartoon from 1984.

There is very little paint on PPT-05. It should be noted that this review features my custom painted sample. The majority of the toy is cast plastic. The standard release features painted eyes, white paint on the shoulder stacks, some blue paint on the chest, the belt, and red on the missile pods. What little is there is cleanly applied and well covered. I had just wished they painted more! I hand painted missing areas such as the blue areas on the sides of the chest, and the base of the antenna. It made a world of difference.

For a big, bulky guy he can get into some dynamic poses, but his mass does tend to limit the range in motion. There’s a ball jointed neck, hinge and swivel at the shoulders, single elbows, wrist swivels, waist, ball hips, swivel at the top of the knee, single knee and ankle tilts. He won’t be doing the splits, but there’s enough functional articulation. 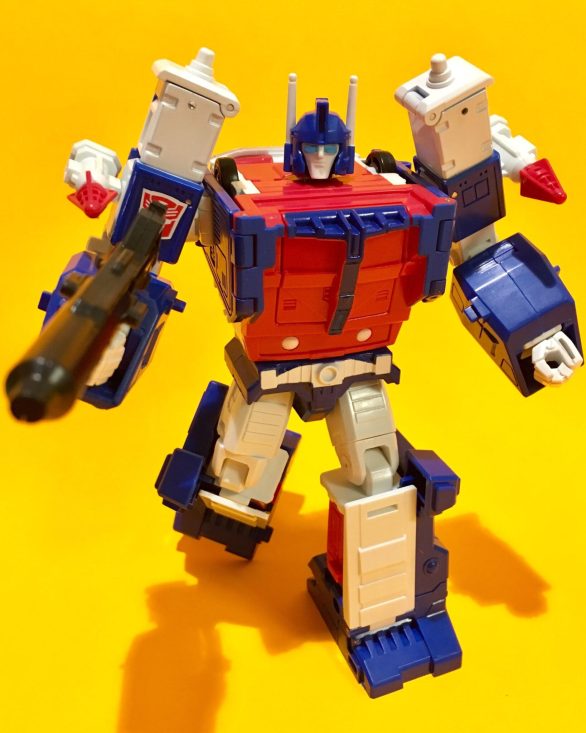 Magnus comes with two rifles. One based on the original toy’s, and one BFG based on what I assume is an IDW comic appearance. He also comes with a total of four interchangeable face plates. Ultra Magnus has appeared in both comics and animation with eyes depicted as large aviator sunglass like lenses as well as smaller, more subdued eyes. Here you have the option for both in both neutral or yelling faces. Also included is a small Matrix of Leadership. The City Commander shortly held the title of Autobot Leader during the 1986 film after the death of Optimus Prime. All who are deemed worthy must make space for this magical mcguffin in their chest cavity, and this toy is no exception.

Imagine a car carrier designed in 1986 made to look like it was from Earth in 2005. The red, white and blue truck and trailer is flawlessly realized here. It’s incredibly solid. Panels tab in, and legs and arms clasp together to assure there are no fiddly bits. It is near identical to the G1 toy and even includes the drop down trailer doors to load up Autobot troop transports.

Papa Toys has been on the lower end of the third party spectrum. Often forgoing many painted details, offering minimal accessories, casting much of the toy in solid colored plastics. Even a relatively large toy like this, which is nearly the height of a modern Hasbro Voyager class Transformer, was only around $23 USD shipped. However, some of those glaring omissions in paint I ended up correcting myself and I don’t expect everyone to go to such lengths. Still, the overall package is a great value. This is one of the coolest looking, and fun to transform Ultra Magnus toys ever.

Papa Toys has already garnered a reputation. With more releases like PPT-05 any stigma behind their name will quickly resolve as consumers will base the merits on the company on the product at hand. Ultralore Warrior is a fantastic original design with unique and clever engineering, and a quality toy. It’s designed for a diehard fan like myself with it’s slavishly G1 aesthetic, but built with the durability that would allow any child to have fun with it’s playability. This was a home run the company needed and I’m eager to see what they can do in the future.