Top 5 Power Rangers Toys We Want to See From Hasbro

In May of 2018, an official press release from Hasbro was released with enormous news in the Power Rangers universe– they were purchasing both toy and entertainment rights for the franchise from Saban Entertainment in a $520 million dollar deal. Since that point, it’s been a little bit of radio silence while fans try to speculate on some things and figure out what could possibly be next in the Power Rangers pipeline:

For a while, it looked like there was no news coming out in regard to Hasbro’s plans for Power Rangers toys. Finally, there was a sneak peek at the first action figure in the new Power Rangers Lightening line. The first figure coming is a White Ranger action figure, which is due out Spring 2019 and will retail for $19.99.

This is definitely an improvement (financially) over the incredibly detailed Power Rangers Samurai: Shinken Red Ranger (S.H. Figuarts) Action Figure that were available at Toys R Us a few years back. While the Samurai Red Ranger and Gold Ranger toys were immaculate and ultra detailed, they were imported from Japan and had nearly a $70 price tag at the time. Now, the figure is priced somewhere in the $40 range, which is nice, although no collector wants to see the price of their beloved item depreciating. Thus in regard to the Hasbro Lightening Collection, It’s amazing that Power Rangers toy collectors will be able to buy detailed, high quality figures for an affordable price for the first time.

Let’s admit it– those 90s action figures, while bright, colorful, fun kids toys through and through don’t quite cut it for many adult collectors unless you’re after all vintage items or have a nostalgic fondness for the figurines themselves. That’s what makes collections so unique and special.

The other Power Rangers action figures slated for Hasbro’s first run (and presumed by Power Rangers Now to be part of the Lightening Collection, though this is unconfirmed) include the following figures:

And while it’s nice for fans to have upcoming items to be excited by, we can’t help but feel that there is somewhat of a missed opportunity occurring. Ultimately, Power Rangers toys can be split up into three categories:

It goes without saying that when Power Rangers Beast Morphers debuts on Nickelodeon in February, we’re stoked to see new toys based on it landing in stores. From that awesome Megazord, to action figures of the three Rangers, or props of their weapons, we want the stores infiltrated with contemporary items based on the newest series of Power Rangers. And that robot is particularly attractive. Hopefully Hasbro will make a nice quality version of it that doesn’t mirror the treatment of the American Ninja Steel or Megaforce Megazords which were badly designed and made of cheap plastics and harsh colors.

4) Legacy Megazords (In a variety of sizes)

Back in 2010 or so, Toys R Us released a line of about ten old school Megazords in the six-inch range. They are absolutely stunning and gorgeous and were all in the $10 range. 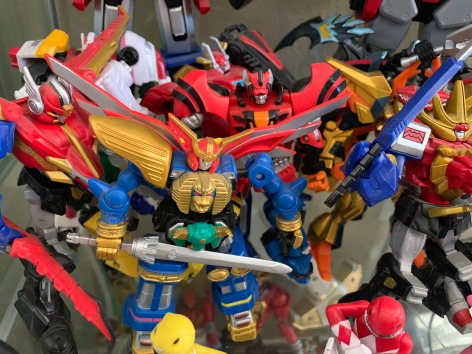 If Hasbro could release a new version of these toys, it would make a multitude of robot lovers very, very happy.

From power coins to ninja swords, to the Dino Thunder wrist gauntlet (complete with Morphin’ key), any toy that can be used as a prop for imaginative play would be fantastic. Currently, there are some scraps left in the graveyard of the Saban toy era that completely miss the mark. There are some Ninja Steel masks and a few trinkets, but Hasbro might benefit from making full on prop playsets. Collectible and high quality (like the Legacy reissue Dragon Dagger) or something scaled down for children to play with, one of the most fun things about Power Rangers is striking that Ranger Pose and holding your weapon high.

2) Legacy Villains and Monsters of the Day

In a world of a million Power Rangers seasons and countless Monsters of the Day, it’s a tall order to expect toys of all of them. But why not on some of them? Currently, in this world of Nostalgia, there’s such a focus on the Mighty Morphin’ Power Rangers season. We’re still getting Rita Repulsa toys, Lord Zedd figures, and even some of Goldar. And while this makes me very happy because I love Zedd and Goldar, there are so many more villains and baddies that would make excellent toys. In fact, past Power Rangers toy lines had more bad guys on the shelves. If Hasbro made an effort to get some of these dudes from other seasons out, I have trouble believing they wouldn’t be well received.

Because come on– these bad guys in their GWAR costumes belong on our shelves! 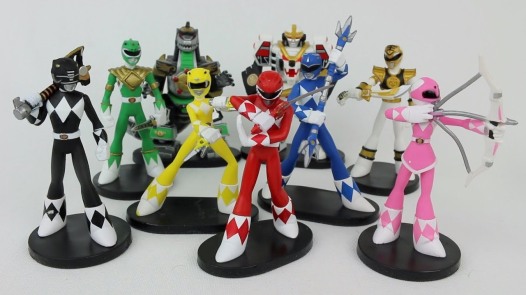 Between the Funko HeroWorld line and Imaginext’s collection for young kids, there’s definitely a market for well-made Power Rangers toys that stray from the staunch aesthetic of the show. Personally, Funko Pops don’t do anything for me and I haven’t collected any of them. But clearly, they have their market.

I’m always saying that Transformers fans are so lucky because there are so many different styles of toys. There are expensive toys, budget toys, robots you see at the super market and pharmacy, and ones you see at collector’s shows. If Power Rangers toys were given the Transformers treatment, I think it would be really exciting. Besides, can you imagine going to Walgreens to pick up some probiotics, meandering into the toy aisle, and bam, right there is a cute, chunky Lost Galaxy Megazord in the $5 range, begging for you to take him home?

Together we can indeed believe in a brighter future.